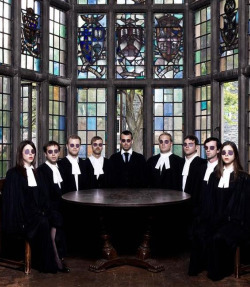 Last night a whirlwind of unhinged Canadian folk-pop swept the hot, cramped room at the back of Hoxton Bar and Kitchen. Despite being at one of London's least endearing small venues, front-man Joel Gibb was apparently glad to have UK provincial dates behind him, and full of expectations of everyone dancing ("We didn't come all the way from Leeds for nothing!").

The Cameras have a reputation for lively stage shows, and sure enough we were treated to plenty of synchronised leaping and yelping from the band, with a particularly energetic turn by their apparently delirious fiddle player. A couple of times Gibb even descended into the crowd to demonstrate his own rather erratic dancing style.

They played equal parts new and old material and drew heavily on last year's career-best album 'Origin: Orphan', the title track featuring in both its wistfully epic original form and a buzzed-up dancefloor version. Other album highlights like 'Walk On' and 'Silence Can Be A Headline' were electrifying - of the new stuff only 'Underage' sticks out oddly (it sounds too much like 'The Lion Sleeps Tonight'). It was clearly thirsty work - after they appeal to the promoter to for their rider on stage, someone has to push their way through the crowd with a dozen bottles of water balanced on his head.

Although it seemed strangely that a lot of people there had gone to HB&K by mistake, spending the quiet numbers chatting, or in one guy's case playing iPhone pinball, by the time the band reappear for an exhilarating encore of half-forgotten anthem 'Ban Marriage' the annoyers had mostly left and there was finally enough room to dance like they wanted us to.