Fortean London: The Dancing Girl Of One Tree Hill 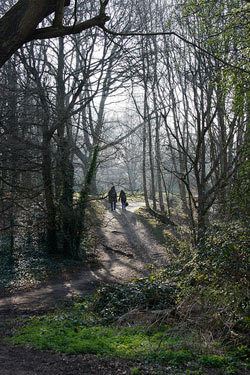 By Brron via the Londonist Flickrpool
For every lost wraith that wafts through a dank cellar there's something far stranger lurking in another part of London. Take the tale of the dancing girl of One Tree Hill from one balmy September day in 1948.

One Tree Hill is a steep little wooded nubbin in Honor Oak on the borders of Southwark and Lewisham. In the forties it was a trysting spot and 18 year old Patricia Wheeler found herself and husband-to-be, Edwin Brock, attending to each other when they saw something moving in the tree-filled slope above them.

It was the figure of a girl, about twenty, dressed in a dark coat with a white dress or pinafore underneath. She danced on a steep part of the hill between the trees in silence. Her feet were not cracking twigs or pounding on the ground. Edwin described her as moving in a "purposeless and frantic" way. "Her movements were balletic, at every third or fourth step of this skipping action she would leap into the air raising an arm high above her head."

Patricia wrote to ghost hunter Andrew MacKenzie 19 years after the event and well after she and Edwin had divorced. Her letter describes what happened next: "She danced in and out, and then started dancing as if to come towards us, but she didn't seem as if to notice us. Ed and I jumped up. He grabbed my hand and we ran, stumbled, and fell until we got to the gate."

MacKenzie contacted Edwin after receiving the letter and his version corroborated hers. The couple had seen something on the hill in 1948. In his book Frontiers of the Unknown, Mackenzie wondered if they had seen a vortice - a miniature whirlwind - and mistaken it for a supernatural alfresco coryphee.

Whether the dancing girl was a ghost, a swirly set of leaves, a hallucination brought on by two lust-sodden 1940s minds, a south-east London pagan spirit or something else we don't have the words to write glibly about, we love the story of the dancing girl. She wasn't your regular spook:

"The ground was hilly and uneven, it was almost impossible to walk in daylight without stumbling, and she danced lightly and happily. She was happy. We shouldn't have been scared, but we were..."