See It, Be In It - The Southwark Mysteries

By Lindsey Last edited 150 months ago
Lindsey See It, Be In It - The Southwark Mysteries 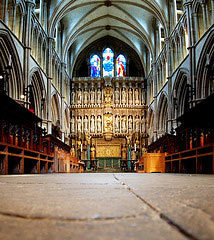 Southwark Cathedral Altar Screen by Homemade
In this apocalyptic play an outsider Jesus takes on Satan for the souls of a medieval prostitute called The Goose, her street-shaman John Crow, and the wicked people of Southwark through the ages...

That's possibly one of the most compelling show blurbs we've had in yonks. Throw in beautiful Southwark Cathedral as the venue and likely you've already hit 'buy tickets'. The revival of John Constable's Southwark Mysteries ten years on from its millennial staging is a hot ticket in our books. Inspired by the medieval mystery plays, this epic performance mixes the sacred and profane with local folklore and contemporary humour, threading stories through time. We're reliably informed that Constable is "putting it mildly, an ace performer" which makes this a must see, folks.

Course, if you tuned into Songs of Praise this weekend (Ed. um, that's still going?), you'll have got a flavour of what's to come as Constable read from The Southwark Mysteries and talked about the show, so hear it from the man himself, on iPlayer.

If that whets your appetite and you've a particular interest in Southwark get immersed in the Mysteries performing in the community cast in the Cathedral. There are 2 free introductory workshops: Mon 22nd and Wed 24th February (6-9pm) at Edric Hall, London South Bank University, 103 Borough Road, SE1 0AA. To book your place RSVP: KatieNicholls@mysteries.eclipse.co.uk.

The Southwark Mysteries will be performed at Southwark Cathedral on 22, 23 and 24 April. Book now to get the early bird discount. Tickets only £15 before 1st March.