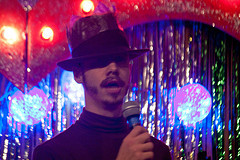 Trot over to the charmingly fag-stained Bethnal Green Working Men's Club on Thursday 11th February for the next exciting edition of 'Ward & White's Karaoke Circus'. The setup is simple: various professionally funny folk (and a few unintentionally funny members of the public) get up and perform songs along with a live band that includes Foz? from legendary 90s art/indie band David Devant and his Spirit Wife. The confirmed guests so far for this Valentine-themed special include a brace of genuine British TV comedy heroes in the you-know-that-one-off-that-programme-oh-god-he's-been-in-loads-of-things-what's-his-name category: Kevin Eldon (Lee and Herring, World of Pub, Dead Set) and Tony Gardner (Love Soup, Lead Balloon), Also showing their mettle on the microphone are ace stand-up Josie Long, and Andrew Collins. Tickets £10 in advance here.