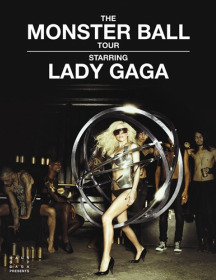 'My shoe broke before "Telephone" but I would rather die than have you see me without heels. But that's what showbiz is all about.' So said a rather scantily clad Gaga seated at a piano about halfway through her show this past Friday. Moments later the same shoe was on the keyboard, the body of the piano was in flames, and everyone in the crowd was singing along to one of her ballads, 'Speechless.'

Lady Gaga certainly left us speechless with her never-ending costume changes, spot-on vocals, and power over the entire audience for nearly two hours. One moment she was dancing around in a purple corset (or at least something resembling a corset) and the next she was in a red cape-like-thing. Did she ever stop singing? No.

Favourites for the evening included 'Brown Eyes' (not maroon, or green), 'Teeth', a rather bloody 'Alejandro', 'Monster', and 'Boys' which included a batch of young male dancers well-equipped with huge...muscles. We'll leave it at that. Of all her major hits 'Paparazzi' provoked the most excitement, not only because of a giant deep-sea fish monster on stage, but also because of Gaga's flaming bra and crotch.

What was most impressive about the performance was not the epic spectacle of lights, costumes, or props but the woman behind it all. At only 23 she has managed to go from opening for small bands like Semi-Precious Weapons, to bigger pop stars such as The Pussycat Dolls, to filling arenas like the O2 on her own. There's something heartwarming about seeing a rising star pause during a song with tears in her eyes to soak in the reality of how far she's come. She might be crazy, but she's the right kind of crazy.