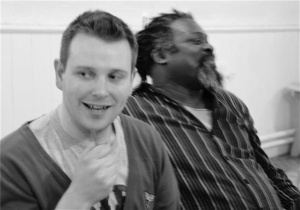 A discussion with the director of upcoming fringe production A Day At The Racists.

Ryan McBryde studied at the Liverpool Institute of Performing Arts and, after graduating, set up his own theatre company called Rogue State, performing at various fringe theatres in London and the Edinburgh Fringe Festival. After assisting Stephen Daldry in transferring the Oscar nominated and Bafta award winning film 'Billy Elliot' to the stage and directing the German premiere of The Full Monty in Frankfurt, McBryde returns to London to direct A Day At The Racists by Anders Lustgarten at the Finborough Theatre. We managed to grab him between rehearsals for some fringe banter.

How did you get into directing?

When I was 17, I read Tom Stoppard’s On The Razzle and I thought this would make a great Christmas show for my local dramatics society. So I asked if I could do it and even though I was a school kid they put it to the vote. I was up against two other shows, Aladdin and The Thwarting Of Baron Bolligrew. To my amazement I thwarted Bolligrew and they let me do it. I loved the experience and decided there and then this is what I wanted to do for the rest of my life.

What advice do you have for people looking to break in to the profession?

Don’t wait for it to happen: Make it happen. Pick a piece you want to do. Get a group of equally motivated actors and creatives around you and put it on anywhere anyhow: Fringe venues, Edinburgh festival, street theatre, shop windows, abandoned warehouses, theatre foyers, wherever; put it on and keep putting it on until someone sits up and takes notice or its time to go home for tea.

What's the most valuable piece of advice you've been given as a director?

Know Your Audience. Quite a famous director told me that. I guess he meant know who they are, what they want, what they’re expecting and how you might exceed their expectations.

How important do you consider Fringe Theatre to be for nurturing theatre practitioners?

It’s essential. It’s a training ground for practitioners from all disciplines to experiment and hone their crafts. For an audience it’s an edgier, more stimulating place to be. More risks are taken on the fringe and often shows are more inventive; they have to be because they don’t have the big West End budgets. I’ve seen some ingenious fringe shows. I’d say about half of our most influential writers, directors, producers got their breaks on the fringe. Stephen Daldry had a new show on every other month when he was first starting out.

In a few short sentences, how would you describe "A Day At The Racists'?

Furious, funny, intelligent and tense. A Day At The Racists is a wakeup call for British politicians. Anders’ play exposes how the BNP targets disillusioned voters often in disadvantaged areas and shamelessly advocates and promotes their view of Britishness. The play champions the validity of personal protest and, in this time of voter apathy, it draws attention to party centralisation and the distrust of politicians in general. As a director it provides me with an opportunity to present a high-profile, high-impact, intellectually and artistically challenging alternative to the mainstream.

What questions does the play pose about the UK's current political state in relation to the BNP?

It examines the political context that brings working class white people to vote for the BNP. Set in London’s East End, it focuses on the abandonment of that constituency by their traditional political representative the Labour Party. Why is there a resurgence of far right politics? Why in certain areas around the country do the white working classes feel like they don’t have a voice anymore? Or a political party to represent them? How does an average individual like you or me make a difference in our community? How can we stand up for what we believe in and affect change? The play’s unique because it doesn’t present the typically one dimensional view critics of the BNP might have. It draws you in, slowly and subtly, until you start to question your own set of ethics.

Are you looking forward to working at a fringe theatre again?

Definitely. This is a piece about a man being swallowed up by an ideology and how that affects his family and friends. What better way to see that but up close and personal.

An adaptation of D H Lawrence’s novella The Fox. It’s all about sexual power play on an isolated farm at the end of the Second World War. It’s a very compelling piece.