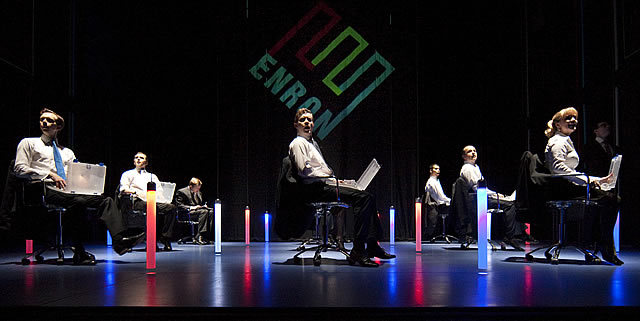 Cutesie-named Lucy Prebble doesn't sound like the sort of girl who'd write a blockbuster play about the collapse of Enron. (Secret Diary of a Call Girl, yes. Corruption and insider dealing in high finance, no.)

But if this financial ignoramus is honest, a play about the collapse of Enron doesn't sound like a great evening's entertainment. And we are definitely wrong in our prejudgment there.

The action takes us from the early 90s (complete with Shiny Happy People soundtrack and video footage of Bill Clinton) when the Texan energy giant was hailed as a model of the future of business, to 2001 when Enron was a bankrupt mess with debts of $38bn. Driving the beast is the Macbeth-like ambition of Jeff Skilling (Samuel West), who not only wants to trade in energy, but video, broadband and even the weather. His sidekick Andy Fastow (Tom Goodman-Hill) manages to pull the wool over most people's eyes, but as the market loses confidence (and people fly planes into buildings), everything is revealed for the bizarre fantasy it is.

One of the most amazing things about Lucy Prebble's play is its ability to make the complicated business of stocks, shares and shadow companies, not just simple, but manifest on stage.

So, when greedy geek Andy Fastow sets up his debt-concealing "special purpose entities" (stay with us) as boxes within boxes, within boxes, even we can see what's going on. Or at least, we understand as much as the Enron guys themselves.

Add to Prebble's simple, pacy, character-led story director Rupert Goold's power to pull every ounce of theatricality out of a script and turn it into spectacle, and we promise you're in for a surprising evening.

Thus the shadow companies become voracious raptors, chowing down on debt in the bowels of the company; a close-harmony barbershop quartet of share market analysts croons their complicity in the con. Accountants carry ventriloquist dummies; the Lehman brothers are Siamese twins, sharing a suit. When Enron seriously messes with California's electricity supply post deregulation in 2001, you get the most satisfying use of the Propellerheads' "Take California" we can ever imagine hearing in a theatre, complete with an eye-watering lightsabre dance.

Yes, true to his form, Rupert Goold's Enron is a showy production, but even that seems to reflect the tricksy nature of playing the financial system and the characters involved.

Samuel West is wonderful as Skilling, managing to bring a touch of humanity to a brainy, unrepentantly greedy bastard. Tim Pigott-Smith is utterly convincing as Enron chairman Ken Lay, creepily concealing his greed behind touchy-feely company jargon and religion. And Amanda Drew is great as what seems to be the one woman in the room, losing out to the macho of markets.

And of course, any drama where a missing set of checks and balances results in financial meltdown will be head-noddingly familiar in 2010. For what might seem like a pretty grey subject, Enron is a brilliantly colourful piece of theatre. We loved it: go see.

Enron plays at the Noel Coward Theatre until 8 May. Tickets from £22.50. Visit www.enrontheplay.com or call 0844 482 5138 for more information. Photo by Helen Maybanks