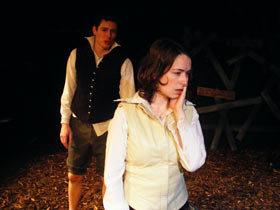 Lachlan Nieboer and Charlotte Powell
Tough Theatre present tough subject matter at the White Bear. The Yorkshire Tragedy is based on real life events involving attempted familicide by one Walter Calverley in 1605.

Extracted from the 'Shakespeare Apocrypha', most now attribute 'A Yorkshire Tragedy' to Thomas Middleton. Over 10 scenes a horrible story is told. A feckless husband, up to his eyes in debt and with a brother in prison on his behalf, resolves to murder his wife and children so dishonour will not be passed on. The wife survives and, unbelievably, forgives (despite the deaths of 2 small children) and prepares to sue for his pardon. This is a paper thin parable with no character development, little by way of psychological explanation and no redeeming aspects offered. Greed and profligacy corrupt. Women forgive. Children are expendable.

A uniformly dressed cast of 9 appear onstage throughout. Bark marks the stage area and boxes create a scene as the setting is indicated on the back wall. The production is as simple as the story and verse and violence carry the narrative. Wife does many an obedient turn, persistently thinking the best of her boorish, cruel and selfish husband. There are several impressive fight scenes as Husband's pretty handy but interest in his character are limited as his persistent sulk makes his temporary suffering over the murder of his baby and his repentance at the last, equally incredible.

The play lacks tragic weight because it's not The Revenger's Tragedy or Hamlet - it's a fragment of real life. Like dramatised news reporting with a dash of moral and social commentary thrown in, it has more in common with a medieval morality play than greek tragedy. There's no hero here, just fallible people in a bloody great mess making dubious and desperate decisions. As a standalone piece it's quite unsatisfying (not to mention grisly) but fans of Jacobean drama must be pleased to see such a rarity revived for the stage.

A Yorkshire Tragedy is at The White Bear Theatre, Kennington until 24th January. Tues-Saturday at 7.30pm, Sundays 5.30pm. £10-12. Can't make it? Check out the script here.