Review: The Petty Concerns of Luke Wright / 3 Stigmata of Pacman 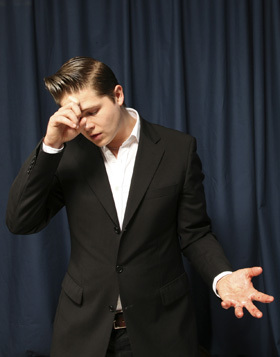 Two-sevenths of poetry group Aisle 16 (and the founder members, no less) started their run of shows at The Old Red Lion in Angel this week. Both Luke Wright and Ross Sutherland investigate themes of ambition and identity in two back to back shows:

Wright is a man who seems to be waging war on the haircuts, trousers and Myspace pages of Hoxton, in a set which melded seamlessly from humiliation to humility. His beautifully presented deliberations on Medium Cheese - "which surely could only be made in Milton Keynes" -, erroneous apostrophes and that "To B&B is not to be" were as much high quality stand up as poetry, even if some aspects seemed a little too rawly real to laugh at. By the end of his set, Wright had mellowed from an outspoken and frustrated youth to his current incarnation as Mondeo Man - a bashfully self-deprecating description which in reality seems as ill-fitting to him as the drainpipe jeans which he described at the outset. As ill-fitting, in fact, as his standard issue PriceWaterhouseCoopers-esque-suit-and-carnation combo was to someone who may have been more at home at The Roundhouse with a five piece wind ensemble and a beat-boxer as backing. The lyricism of Wright's words - and the Hip Hoppiness of his hand gestures - was not lost on his audience, who were grateful to be spared the grating shame of rhyming couplets which make all too frequent an appearance at spoken word events, even if some of his beautifully constructed turns of phrase were mangled slightly by the break-neck speed of their delivery.Wright's search for ego massage in the form talking to strange men in strange pubs in strange towns, confrontations with synonymous bum-burners (no, really), and opening the Pandora's Box of horrors which results from Googling yourself, was riddled with poignant fragility and tenderness. In contrast to this was Ross Sutherland's explorations into the Ministry of Inescapable Futures, which takes us forward to the, er future, using animation, diagrams, sound effects and a plastic bin. The poetic ex-music journo was so unkempt as to make even the archetypically shambolic Dan Atkinson look rather, well, "kempt", yet his observations on "armageddo-porn" - concocted by a sinister mix of Nostradamus, Aldous Huxley and The Daily Mail - were tightly crafted and insightful. However, it's his uniquely patriotic and borderline Jabberwock-ish retake on the classic Red Riding Hood tale which incites the first real spark of admiration and awe. The eponymous 8-bit life perspective is an inspired interpretation of the perils of returning to the familial nest, and he really hits his stride when he reaches Spar and recounts under various guises the torment of - at the age of 27 - being refused alcohol (something we at Londonist are all too painfully familiar with). Sutherland is more engaged with the audience than Wright, who in turn was more focused on the structure of his set. In walking the tightrope between poetry and comedy each seem to have struck a different balance, yet to equal jaw-dropping success.Old Red Lion: Luke Wright @ 7.30 / Ross Sutherland @ 9pm Tickets £10 each / £16 for both shows. Until 30th JanuaryYou can also catch the members of Aisle 16 at Homework, in the Bethnal Working Mens Club on the last Wednesday of each month.