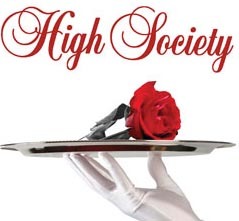 Until the end of January there's still time to treat yourself to a feast of classic Cole Porter tunes including 'Let's Misbehave' and 'Who Wants To Be a Millionaire?' Upstairs at the Gatehouse, Highgate in their impressive revival of High Society.

The musical started out as a 1956 film with Grace Kelly, Bing Crosby and Frank Sinatra, but is presented here in its belated 1998 Broadway adaptation with additional Porter numbers interpolated. The film took its story, of a wealthy socialite called Tracy Lord whose wedding plans are disrupted by the simultaneous arrival of her ex-husband and an attractive journalist, from the earlier play and film The Philadelphia Story. However, director John Plews has ingeniously transposed the action from its original American setting to Hampshire. So in summary, this production is an Anglicised version of a Broadway adaptation of a Hollywood musical based on an earlier film of a stage play!

While this may sound complicated, the breezy and colourful production makes it all seem effortlessly simple. The music alone is a joy, and the choreography is accomplished. The younger cast members are all of a very high standard, with Peter Kenworthy particularly striking as Tracy's suave ex-husband Dexter, demonstrating charisma and a warm tone.

While it's true that some of the quick-fire banter of songs such as 'Well, Did You Evah!' gets lost amid the music and on-stage action, this is more than made up for by the exuberant energy of the performers. And if at times the camp bedroom farce and English accents combine into something closer to a Carry On film than anything Porter would recognise, this actually helps to rejuvenate what might otherwise seem quite a dated show.

Definitely not one to miss if you like your musicals as sparkling and heady as vintage champagne.

High Society runs until 31st January at Upstairs at the Gatehouse, Highgate. Tickets are from £10.