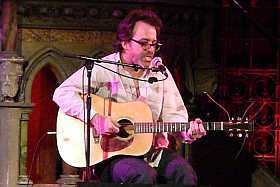 On Tuesday night cult singer-songwriter, author and “Gilmore Girls” star Joe Pernice brought his extensive repertoire of Teenage Fanclub-esque country pop to the gothic surroundings of the Union Chapel. The former Scud Mountain Boy is taking time off from the Pernice Brothers to plug his recent covers album, “It Feels So Good When I Stop” in his first UK shows since 2003. The album is a companion piece to Pernice’s well received debut novel of the same name, featuring his interpretations of a diverse selection of songs that feature prominently in the book.

With just his acoustic guitar, he performs a stripped back set spanning his entire career from the Scud Mountain Boys’ “Oklahoma” and “Grudge Fuck” to the Pernice Bothers “Amazing Glow”, interspersed with anecdotes on his time on the road and insights to his family life. Covers of Del Shannon’s “I Go to Pieces” and James and Bobby Purify’s hit “I’m Your Puppet” were among the highlights off his latest record - although surely we weren’t the only ones disappointed he didn’t go all Dick Van Dyke on us with his version of “Chim Chim Cheree”. Several new songs from his forthcoming album, “Goodbye Killer”, also got an airing; reassuring fans that he’s not got carried away with his recent forays as a novelist and given up the day job. Next time just don’t leave it so long Joe.