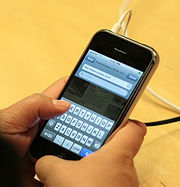 Photo / Takuya Murata
In a rare example of corporate confession, the director of phone company O2 has admitted that the service provided to London has been shoddy in recent months.

During an interview for the Financial Times, CEO Robert Dunne confirmed that customers were frequently vexed by a patchy or non-existent network that prevented them from making or receiving calls, and data transfer rates that made a dial-up modem seem zippy. Dunne laid the blame at that golden-egg laying goose, the iPhone, saying that the bandwidth-hungry beast was eating the rest of the network. Seems that, with the Apple phone now available on O2's competitors, there's no need to protect the rep of their best-selling product.

Are things going to improve for Londoners? Dunne promised that the company would spend £30 million in 2010 on network upgrades, bringing in more base stations and "liaising with handset manufacturers" about how to tweak things to get the best results. But with the iPhone now available on Tesco Mobile — which piggybacks on O2's network — and data-gorging smartphones, including the much-hyped Google Nexus One, predicted to see exponential growth this year, the phone operators are fighting a difficult battle. Perhaps the current era of unlimited data plans will be a short-lived one.