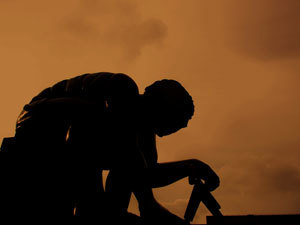 Of the performers, Evans was clearly the odd man out: he's younger, he's hunkier, and his surname is not a verb. And unlike his partners, this was Evans's first time performing at the Poetry Hour. While all of the actors occasionally stumbled, Evans's inexperience was betrayed by a more pronounced shakiness. That being said, his energy made up for any verbal misstep, particularly in his fast-paced recital of 'How They Brought the Good News from Ghent to Aix'.

Veterans of this stage and many others, Dance and Irons gave incredible renditions of Browning's work. Even though we aren't huge poetry fans, we could not help but be totally absorbed by their sometimes macabre monologues. It didn't hurt that, casually tousled and a bit greasy, Jeremy Irons still puts the sex in sexagenarian.

The Josephine Hart Poetry Hour provides unique access to some of the world's best actors bringing life to classic poetry. Priced at £7.50, or £5 concession, it is also incredibly affordable. With a roster of past performers including Hugh Dancy, Eileen Atkins, Bono, Sir Roger Moore, and Ralph Fiennes, we cannot but recommend that you catch the next, though yet unscheduled, edition.