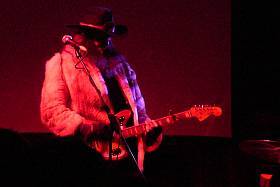 Wednesday night saw all the fun of the End of the Road festival come to Cargo for their now regular Christmas Shindig. We’re big fans of the festival here at Londonist but as it’s in Salisbury we rarely get the change to bang on about it on these pages. The event sees them successfully transferring the eclectic spirit of the festival to East London, with the venue decked out with fairy lights, hot cider on offer and to get the party started, a game of Ringo:Music Bingo, before a trio of diverse musical talents take to the stage.

First band on is Brighton’s Esben and The Witch who make mesmerising, ethereal music in the style of Kate Bush hanging out with Portishead, definitely a band to keep an eye on.

Next up are Joe Gideon & The Shark, possibly the hit of the night. The brother and sister’s spoken word blues rock based narratives, reminiscent of Art Brut, or a beefed up version of cult London band, Animals That Swim, went down a storm with revellers and was a sure sign that great things are yet to come.

Finally, the headliner for the evening, Josh T. Pearson, a daunting but charismatic figure who, with his beard, Stetson and white fur coat looks like the result of an unholy union between Lemmy and a polar bear after a night on the moonshine. The former front man of Texan psychedelic country rockers Lift To Experience has been touring solo the past few years performing epic country in the vein of Bonnie “Prince” Billy, but tonight sees him reunited with his former Experience sticksman. The set is drenched in feedback and harks back to his previous band's sound, coming across like a countrified Sonic Youth. Pearson is a truly remarkable and versatile performer (he also has impressive repertoire of drummer jokes, sadly not aired tonight) and his talent demands to be exposed to a wider audience than his current cult following.