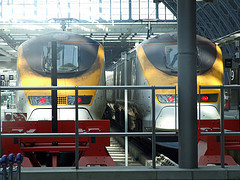 We sincerely regret having to take this decision and we understand how frustrated and disappointed travellers will be, particularly those who have been waiting to travel for the last two days. We strongly advise passengers whose travel is non-essential to change their booking to a later date or claim a refund on their tickets. We have also announced our compensation policy for inconvenienced travellers.

Ironically, Eurostar drivers staged a strike over pay on Friday but no one noticed as the cold and snow scuppered services in a far more devastating manner.

There will be an update from Eurostar at 6pm today.