This week's blog, Gizmonaut, reports on London's policing and human rights, watching a variety of sources and cases, contributing to debate and openness on this issue in our capital. 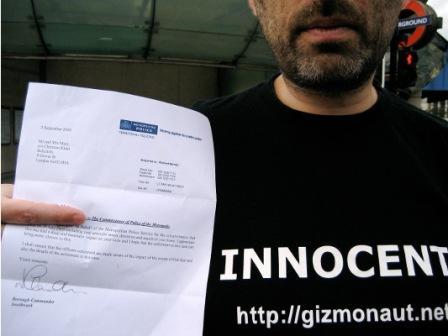 Describe your blog in less than 15 words

Reporting about being calm, almost too calm, on human rights and policing issues, plus technology.

I created a personal website, gizmonaut.net, in 1999. Its content had remained mostly static. At the end of 2005, I published the story of my arrest by the Metropolitan Police and kept updating it with new developments. Many readers asked for a notification mechanism for when I updated that story. After trying a few options, I started a blog so that readers could subscribe to its RSS feed. Eventually I published on the blog news-related articles on more general issues. The separation about what goes on the blog part of the website and what doesn't is not clear cut any more.

What about London inspires your blog, or what is its mission?

Security theatre measures that criminalise innocents while not increasing overall security are a constant source of inspiration. A large proportion of posts is about stop and search tactics, the National DNA Database, terrorism and human rights. Most London-related posts are about some aspects of London policing. There are a few posts about technology and foreign topics.

Several posts are based on my unfortunate personal encounter with the Metropolitan Police. They serve several aims: exposing what the Met is doing to innocent Londoners, and documenting the actions I've taken and their outcome (question to the MPA, answering consultations, giving talks, participating in demonstrations and rallies, etc.) so that others can figure out if any of these action is also appropriate for them.

What's working and not working about policing in London? What would you like to see change?

I have investigated in depth only a few narrow policing issues so can only answer where I have a reasonable understanding of policing in London.

The police attempt to cover up their mistakes is a major issue. This has been seen time and again. For instance, CCTV was allegedly not working when Jean Charles de Menezes was shot, missing when Sean Rigg died in custody and when Ian Tomlinson was pushed, and not recovered when I was arrested (I asked Transport for London for it, but too late). Too many have died in custody with little apparent justice and lessons do not appear to have been learnt: at the inquest into the death of de Menezes, it was established 'there is a real risk, then, it could happen again,' and only this October there were reports that armed officers from CO19 would pro-actively patrol London. One positive news is that Sir Paul Stephenson promised this won't happen.

Powers of stop and search, in particular those under section 44 of the Terrorism Act 2000, are used to harass many innocents. Photographers are particularly affected. Also of concern to writers and photographers alike is the more recent section 58A of the Terrorism Act potentially making writing or photographing police officers an offence. Freedom to protest around Parliament Square has been severely restricted by the Serious Organised Crime and Police Act 2005. Until these acts are repealed, the police could decide on policies that restrict the use of these powers. However that neither the Association of Chief of Police Officers changed its guidance on DNA retention since the European Court of Human Rights ruling and that no chief constable rebelled does not give much hope.

The mechanisms in place to supervise the policies and actions of the police are too weak. The Metropolitan Police Authority, at the two full authority meetings I attended, did a reasonable job at questioning the Met but didn't follow up with strong actions on unsatisfactory responses. The Independent Police Complaint Commission has a much too narrow remit. If it had a stronger remit and more independence many civil actions against the police would be avoided.

What would you like Londoners to expect of their police?

When Londoners read about a police operation, they should expect it was based on solid intelligence and that those arrested are likely to be convicted. They should not wonder whether all the detainees are innocent and whether the story pushed by the police is a cover up. Provoking Londoners from all classes and races is counter-productive for the Met, and does not make us any safer. The Met deciding to be judged according to the nine principles of policing and not some internal artificial targets would be a good thing for Londoners.

How do you do all your research? Is the information easy to get hold of?

Too much information published in newspapers and on the web is poorly researched, and too often the information relies on a source which is not linked to. A lot of my time is spent trying to find the source of stories that interest me. I look for authoritative sources such as parliamentary debates, original reports some news stories are based upon, court rulings, acts, etc. I include these links for readers wanting to explore the issue further by themselves. Another very useful tool is the Freedom of Information Act; several posts are based on responses to Freedom of Information requests, mostly from police forces, the National Police Improvement Agency, and the Home Office.

When I get several requests about the same topic or look for information that I expected to exist but seems to be nowhere I publish some notes or guides. Typical of the former are the List of recordable offences and the Information retained in the National DNA Database profile records posts, and of the latter is A simple guide to the Freedom of Information and Data Protection Acts post.

My writing has connected me to readers, some of them bloggers. What's been most rewarding are emails of individuals sharing how reading my story gave them hope and how practical advice on my blog and website has helped them deal with the difficult situation of being arrested.

I tend to read other sites based on the topics they cover rather than where they're based. Here are, in no particular order, some sites where the author(s) include London-related content: >Re: Photo and some of Peter Marshall's other sites such as My London Diary, my local No2ID group, Parliament Protest, Spook Country, London 2600 and Mayor of London (all offshoots of the excellent, but less London-focused, SpyBlog), the Sentinels of London, Mobile Monday London, the Ian Tomlinson Family Campaign, the United Campaign Against Police Violence, the UCL Student Human Rights Programme, the Netwalking club, etc.

Where do you live and why do you love it?

Clerkenwell. It's easy to walk from to most any other place in London, and it's close to the Regent's canal, which is a great way to walk East or North West.

Just one? The East End with its graffiti; Soho for the Prince Charles Cinema and Asian supermarkets; Parliament Square to be heard by MPs; Hackney for its restaurants...

What do you know about London no one else does?

The hacker tour of London, an unusual visit of London by some international hackers many years ago! And the back stairs of Southwark tube station - they're very dirty.

No. I avoid it most of the time.

You can petition the Prime Minister to call for an end to the use of secret evidence. If you're innocent and your DNA profile is on the National DNA Database, you can reclaim your DNA.