Crime & Punishment In A Mayfair Squat 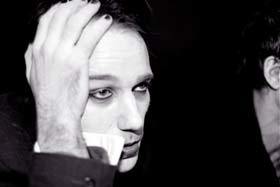 Perfectly in tune with the austerity and chill of January after the lush indigestion of an all consuming Christmas, a site specific theatre company are presenting a new stage adaptation of Fyodor Dostoyevsky's classic novel, "Crime and Punishment" at the Oubliette Collective Mayfair Squat - the former offices of the Readers' Digest - between 2-5 January.

Ashes and Diamonds will create their "Hologram Rose Theatre" in 2 rooms of the Curzon Street squat to tell the story of poverty stricken student, Raskolnikov, in St Petersburg 1865. The gripping story of murder, morality and redemption can be viewed from 2 positions through connecting doors. When open the audience become one. Closing the doors divides them to experience the performance from their two distinct perspectives.

The production will draw on Dostoyevsky's use of parable and dream, mixing sound design and projection creating a play "as direct and shocking as a blow from a hatchet" in the head of an old woman, presumably.