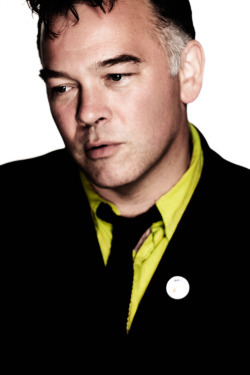 Image copyright Gavin Evans
Yes, this show - If You Prefer a Milder Comedian, Please Ask For One - is the one that got the Daily Mail in a tizz over the summer. But after watching the full performance, the most shocking thing is coming away with evidence of just how papers willfully twist reality to shape their own ends. Stewart Lee, cruel and insensitive? Stewart Lee, boorish and ugly? What a deliberate and crass misinterpretation of what the man's about.

Because Stewart Lee, should you be young or unfortunate enough not to have encountered him in his younger, more televisually exposed days with Richard Herring, is an exquisite satirist. His laid-back, sarcastic manner suggests someone who doesn't care, but if you listen to the actual words (the words, Daily Mail) it's clear that he's pained by the facile and knee-jerk elements of our society - which he then adopts and rips apart from the inside. The effect is subtle but the method is confrontational; he faces down the audience and takes us to task for laughing at unusual moments, stopping to explain the structure of one particular joke, breaking it down into its constituent parts. Meta-comedy, if you like.

We've also got to take a moment to mention his style. That repetitious style that's so very literary. We've got literate comedians, who might chuck in a reference to Dryden or Joyce, but Lee has a rhythm to his routines that's almost poetic in its meter. And it's a measure of his talent that, even with the careful and lengthy build-up, the punchline still catches you off guard. Yes, he's clever, but not - as so often accused - clever-clever.

But what you really want to know is: is he funny? Of course he is. Would we have rambled on for several paragraphs of gushing praise if we'd sat there stony-faced, silently appreciating form and phrase? It's not a book reading. Laughs are first and foremost, provoked by a man in complete control of his craft. This really is a show you cannot miss.