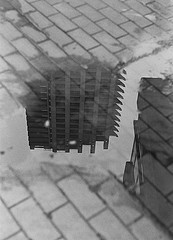 Photo / dot-dot-dot
Via Time Out's print edition, we learn that the Barbican is planning to close Cinemas Two and Three in March. The plan is to replace the two screens, which are located a fair distance from the larger Cinema One, with state-of-the-art auditoriums in a space beneath Ben Johnson house*. The existing facilities would continue to be used for talks and conferences.

BarbicanTalk, a residents' forum, has generated much discussion about the plan. Some are concerned about the noise and disruption that building work would entail, others query the decision when Cinemas One & Two were extensively redeveloped just a few years ago, and some suspect that this is all down to the opening of Frobisher Crescent: there are concerns about sound leakage from the cinemas into the new apartments, which are directly above.

Should the new screens be built, they will in the long term represent a distinct improvement to the Centre's film output. Grouping three spaces around a newly-built entrance on Beech Street will help give the Barbican's film programme a distinct identity; yet losing two venues for three years, perhaps more, at a time of increased ticket sales and exciting film seasons, is a major blow. As one user on BarbicanTalk puts it: "It would seem that the priority here is property development rather than the provision of a busy and varied film programme".

*This piece originally claimed, incorrectly, that Ben Johnson House is one of the Barbican's three skyscrapers.