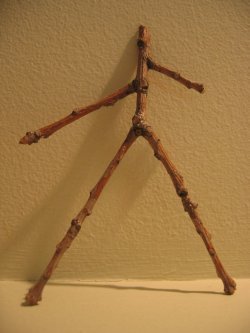 There are some mysteries within the field of the paranormal which simply defy any explanation. Take for instance the creepy case of the Stick Man. In 2003 a story appeared on the message board of Fortean Times Magazine, from a man who claimed that 'several years ago' he'd encountered a bizarre humanoid in the Brockley area of south-east London.

His story read as follows:

I was walking from a friend's house to my own, in the early hours of the morning after a night of general chat while I was at university here in London. I had drunk only tea or soft drinks all night and had consumed no drugs whatsoever. The time was around 6 am and dawn was literally breaking when a friend and I found ourselves walking down my street where my apartment was located. We saw a figure walking up the street towards us. The word we coined later to describe its movement was 'lolloping' — a kind of up and down bouncy walk. It took a few seconds for the two of us to realise this was no human being.

The creature was entirely black and like a cardboard cut-out, flat and one-dimensional. It had no features at all, and it had arms that hung down to its knees. It seemed to be ignoring us, then it seemed to realise we could see it and it began to lollop faster towards us. We ran to my front door and hid in the hallway as quiet and unmoving as possible when we saw the thing — we felt it was male — approach the front door and appear to look through the glass from the way its head moved up and down and around. It then turned away.

Just what had the terrified witnesses observed that morning?