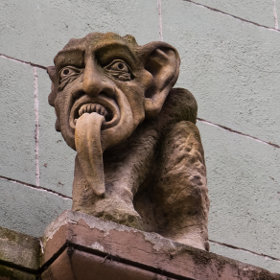 On the 25th September 2009 the Daily Mail newspaper reported on actress Phyllida Law, and the fact that from her home at Crediton Hill, West Hampstead she'd had two ornamental gargoyles stolen. The woman, whose daughter is actress Emma Thompson, found her stone figures missing in the summer of 2007. Inspired by the film, Harry Potter & The Order of the Phoenix (in which her daughter stars) Ms Law designed a placard warning that whoever had taken the gargoyles would be cursed. The note, which read, "Be so kind as to return the children's stone statues. Otherwise curses will occur! You have been warned!" was accompanied by two Neighbourhood Watch mock-ups labelled 'Neighbourhood Witch', with a broomstick-riding figure drawn on.

Bizarrely, on September 20th 2009 a black rucksack appeared outside the door of Ms Law's house. Initially the actress was rather suspicious of the bag but, after forty-eight hours she hesitantly investigated. The bag was very heavy and contained the two missing gargoyles.

The figures were accompanied by a note that read, "Help me, please. I have been very, very ill since I stole these. Please lift the curse. Sorry."

Overjoyed by the return of the gargoyle's Ms Law responded by washing out the rucksack and leaving it out, accompanied by a note that read, "Thank you for returning the children's statues. All curses have been lifted. Hurrah!"