Sam of Ghost Signs is this week's blogger, whose fascination with the legacy of painted wall advertising has led him to document them as they come and go in London's ever-changing environment. The blog has been mentioned as a favourite by many of our previous interviewees so we thought it was high time we found out more.

Documenting the lost craft of hand painted wall advertising a.k.a ‘ghostsigns’ before they all disappear. 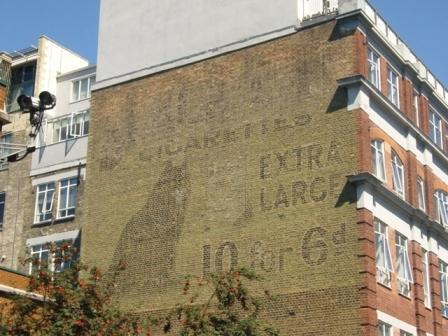 I needed a platform for the work I was doing, somewhere to make sense of everything and share this with others. Having an online presence felt like a massive gap and writing a blog was a simple way of gaining this. It's funny looking back on those early posts and how the blog has evolved alongside the nature and scope of the project. There was something of the 'first album' effect in that the first month saw me write 34 posts, a clear spilling out of things I'd wanted to write about for a long time. Month two had 19 posts and it has leveled out since then with five or more being a busy month.

One thing - the fading ghostsigns that can be found across the capital. I first started spotting them in Stoke Newington and was soon cycling to all corners of the city to follow up leads given to me by friends, family and members of the public. It's been a real adventure full of discovery.

What's your favourite find so far to date - and is there anything you'd love to find?

Favourite find is definitely the Black Cat Cigarettes sign on Dingley Place in Islington (pictured). It is still one of the best signs I've ever come across. The thing about that find was that I'd been cycling past it every day for months but because I used to come home by a different route I had only ever gone down the road in one direction. One day I happened to glance backwards and spotted it.

As for what I'd love to find, my role has evolved slightly from when I was out and about photographing every week. I am now working on cataloguing ghostsigns from across the country to establish a permanent photographic archive at the History of Advertising Trust. Through Flickr I am now part of an extended network of enthusiasts and photographers which means that new signs tend to get picked up and shared by others before I see them - e.g. the Veglio Cafe sign recently revealed on Oxford Street.

What would you advise people to do to notice the details in London you do?

The thing that has consistently encouraged me with the project is that once I tell people about ghostsigns they immediately become sensitised and begin to notice them. Meeting people I haven't seen for a while often starts with them saying 'I saw one of your signs'. Once you spot one you'll start to see them everywhere. You can increase your odds of making a discovery by looking up as they are often on the upper parts of buildings. Before the Flickr group really kicked off I used to feature signs that had been sent to me via email and I was never short of material.

'No' is the short answer. However, the project has given me a new lens to look at London through and I've traveled to places that I otherwise wouldn't have gone to. It's also got me onto TV and radio which wouldn't have happened without the blog .

I started out commenting on other people's blogs and subscribing to their RSS feeds. Then I noticed that people were referencing me which is always flattering. My blog is pretty niche but lots of others touch on the same and related subject matter. In London you've got people like Jane, Caroline, Sebastien, Yelfy, Chris. Outside of London in the UK there's Lost in Manchester and Amy in Leicester. And then on the global scene you could look at this for France, Frank in NYC (and beyond) and Lawrence in Philadelphia.

I should have read this question before answering to the last one! All of the above I guess but lately I've really enjoyed the stuff that Sebastien has been posting, mainly because he seems to be finding lots of signs that are new to me.

And for some general London chatWhere do you live and why do you love it?

I live in N5, literally inside the new Arsenal (Emirates) Stadium complex. As proof here's a picture of my flats reflected in the windows of the stadium. I love it because I grew up in the area and it's as close as I can possibly be to my favourite team. When I occasionally get hold of a ticket it’s great to have a 20 second walk home after the game.

Clissold Park. My first memory of going there was for my 7th birthday celebrations and I've been a regular ever since.

What do you know about London noone else does?

So far your poll reveals that roughly 25% of London bloggers have been sick on the tube, although that's counting a couple of 'allergy' and 'dodgy take-away' stories. I’m with the minority on this one.

Thank you for the interview. The Ghostsigns Archive launches in January and I'm currently looking for a publisher to help create a book of the project. If any of your readers want to get involved then all my contact details are on the blog. I would also recommend checking out this video for what we could be doing in London in the future.