Review: Grayson Perry In Conversation With Will Self

By Londonist Last edited 150 months ago
Londonist Review: Grayson Perry In Conversation With Will Self 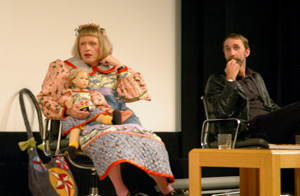 One of these kids is doing his own thing...

Last night, before a packed and warmly appreciative audience at the British Library, the 2003 Turner Prize winner Grayson Perry told novelist Will Self he was pleased at the art market’s collapse in the current credit crunch.

He called the art boom of the last 15 years “an interesting moment” - but “people with hair gel” with “estate agent values” had taken over the art world (including collectors, dealers and artists themselves). Now, post collapse we would see “a re-evaluation of what’s happened”.

Perry himself is riding high at the moment. Fresh from last month’s triumph at the Frieze art fair, where he exhibited the massive Walthamstow Tapestry (we called it “a thing of intricate sewn brilliance”), he has launched a range of fabrics for Liberty, the first monograph about him has just been published, and his exhibition at the Victoria Miro Gallery (where there is another chance to catch The Walthamsow Tapestry) has been extended until this Saturday. Collectors with limited budgets are able to purchase fragments of Perry ceramics at Tate Modern.

His conversation with Will Self was to mark the publication of the monograph by Jacky Klein, published by Thames & Hudson.

Perry noted that consumerism, as it envelopes us, has been a consistent theme in his work. He is interested in what it gives to people. He is engaged in a vast interconnected project of creating his own civilization, an artful commentary on our own culture: “I filter culture through me - suck the goodness out of it” - before reinterpreting it through crafted art. He would like to offer his process of making as an inspiration to viewers. Will Self summarized consumer culture’s fetish of “purchasing” as “the crack cocaine” of making things.

Process too is important for Perry, who sees it as integral to his way of working. He does not impose a pre-imagined order to his work, but allows the work to develop as he creates - he works “from left to right”, refining his skills and ideas as he progresses - thus achieving an organic rather than formal unity. He said his first ceramics “were inept - but people thought they were ironic”.

Self asked Perry if consumer utilitarian ceramic work was a future option, but Perry claimed the prices his work now fetches would effectively make this impossible - the expense of the pieces would remove them from everyday usage.

Perry came across as intelligent, engaging, witty and modest but with a grounded understanding of his emerging position as a National Treasure. His appearance, dressed in a full faux-folk costume of his own design, made out of his own Liberty fabrics, was truly spectacular.