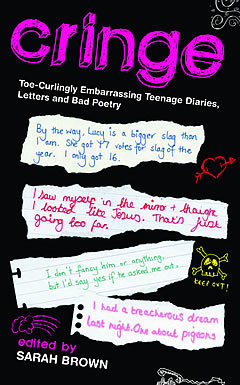 Are you an ex-adolescent? We're not talking about any teenager who's just happened to have grown up, but card-carrying, diary-hiding, bad-poetry-writing bundles of hormones.

Sure, you might put on a suit every day and hold down a proper job writing reports and jotting notes on appraisals now, but what about that gangly self-absorbed hopelessly creative pre-you that once existed? And, ahem, *wrote*.

We've all been through adolescence. And, as the London Cringe Night organisers recognise, most of us have the diaries, suicide notes and bad poetry to prove it. Sarah Brown (not that one, sadly) found her old diaries and presumably decided the cringing she did while re-reading them to herself just wasn't strong enough. So she decided to read them out loud. To an audience. The Cringe Night was born.

Cringe Nights come to London from New York. It's a simple idea: head to the George on The Strand, bring the diary / letters / poetry from your former life, and read them to a mocking sympathetic audience.

"The jackboots of convention hurt my swollen toes"

"You don't know how big a dilemma it is for a 12 year old, feeling 18...""All I think about now is kissing and frenching him. I hope my thoughts come true at the skating rink this Sunday!""By the way, Lucy is a bigger slag than I am. She got 17 votes for slag of the year. I only got 16""I lumber like the sad clown with the hope that my performance might make you smile"

Think you can do better?

London Cringe Night takes place at the George, 213 The Strand, London WC2R 1AP on 23 November, kicking off at 7.30pm. Entrance free. Or join thier facebook group.