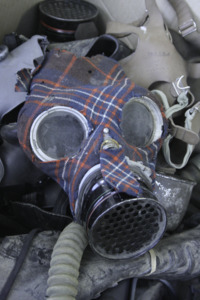 The last time that Angels, London's most famous theatrical costumiers, had a sale, prospective customers camped outside their warehouse from 3:00am the night before. Their next event on Saturday is more specialised but will probably attract the same level of interest. With 250,000 pieces ready to go, surely there will be enough to go around?

Although you might suspect to come across a sea of camouflage, there's a diverse range of pieces on offer, from greatcoats to band uniforms as well as the obligatory khaki. Set across three rooms covering 30,000 square feet, this sale is almost exclusively military equipment and original costumes, with a small selection of civilian uniforms and utilitarian clothing. Almost all of the articles for sale have been used in film and theatre productions including Saving Private Ryan, Band of Brothers and The Great Escape. The first room is filled with smaller items and equipment, from gas masks and gladiator armour to canvas satchels and kepis, with everything categorised by era and origin with most of the items coming from either of the Great Wars and dating from 1900 onwards.

At first glance there doesn't seem to be as much on offer for women, but many of the military style jackets are available in smaller sizes and echo couture trends this season. Think Cheryl Cole minus those ridiculous trousers and you've got the idea. Lurking amongst the rail of air hostess uniforms, nestling between some vintage Air France-issued dresses, a Hermes designed uniform for the now defunct UTA was unearthed and there may well be other gems hidden in this vast haul - we also spotted a tartan gas mask and mitres from a production of Gulliver's Travels.

At the last sale they charged by the bag, but this time it's on a per piece basis. The second two rooms are devoted to hanging rails which should make for easier browsing through garments. Doors open at 8:30 on Saturday morning but with strong interest from collectors, theatre groups and military enthusiasts, you're advised to get there early. Who knows what you'll find?