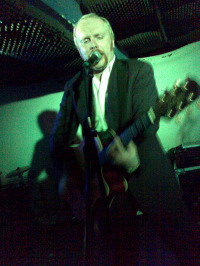 If there is one thing you don't expect from a Luke Haines gig, it's jokes. Last night's sold out gig at The Luminaire in Kilburn found old misery-guts in an unexpectedly jovial mood playing songs from his splendidly caustic new album '21st Century Man'. The title track - a six-minute catalogue of 70s and 80s news and pop culture references - is bonkers on paper, but Haines' live acoustic rendition made it sound like a tender elegy for his childhood memories. Occasionally breaking off mid-strum to add in a quip or two, it seemed that the arch-sceptic was suddenly channelling Richard Digance.

Almost as unexpected was the generous helping of songs from The Auteurs back-catalogue, from a passable take on their ominous debut 'Showgirl' to a strung-out version of 'Unsolved Child Murder' that reminds you what a shockingly deft lyricist he can be. Haines would never make any great claims for his vocal abilities but tonight he even manages to hold a tune together, despite dodging a few risky notes. And he cuts a stylish figure in his white suit, even if his handlebar moustache sometimes makes him look like a leering version of Rufus Hound.

The main set closes with a cinematic double bill of 'Mogadishu' and 'Baader Meinhof' from his terrorism-themed 90s side-project, covered in oceans of effects and distortion. After an embarrassing hiatus when he leaves the stage and the previously-enthusiastic Luminaire crowd momentarily seem in two minds whether they want more, he bounds back on and leads his musicians in a triumphant rock-out version of forgotten Britpop nearly-hit 'Lenny Valentino' (which in a parallel universe still fills indie disco dancefloors today). Two false endings and squalls of feedback prove that despite the high spirits, Haines is still no pussycat.

Photo by Skip the Budgie.