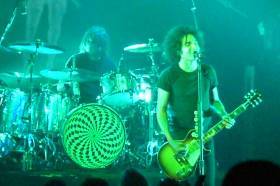 Last night legendary grunge metallers Alice in Chains returned to London for the first of two shows at the Kentish Town Forum in support of the recently released “Black Gives Way To Blue”. Their first studio album in 14 years also marks the debut of new boy William DuVall, taking on lead vocals following the tragic death of lead singer Layne Staley seven years ago. It’s extremely risky business replacing the front man of a seminal band, but sceptics were soon silenced when the new album emerged, bagging rave reviews across the board.

The nihilistic Seattle band always straddled metal and grunge camps, but it was definitely metal crowd tonight, with flannel shirts few and far between. Coming on stage to a sea of devil horns, the familiar heavy riffs start and it’s soon evident that this is the real deal rather than some watered down version of the band.

They are in great spirits and are clearly enjoying playing together again, with DuVall giving a lively and enthusiastic performance. An acoustic intermission sees them perform a moving version of the dark slab of beautiful melancholy that is “Down in a Hole”.

Inevitably, it was the older material that got the biggest cheers of the night, but the new material was greeted favourably. They finish off the night with a duo of “Dirt” era classics - a spine tingling rendition of the mighty “Would?”, followed by “Rooster”. It’s a glorious high to finish on, and this is a beginning of a new and intriguing chapter of the band

Alice in Chains return to London next month to play the Brixton Academy on Monday 7th December. Tickets are available here.