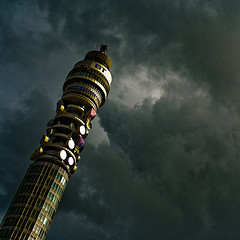 The revolving restaurant at the top of the BT Tower, which last welcomed paying diners to its peerless view of London in 1980, is set to re-open in two years time.BT is currently scouring the kitchens and galleys of top restaurants for a chef to mastermind the menu on the tower's 34th-floor space, and the aim is to open in late 2011. The likes of Gary Rhodes and Heston Blumenthal are being considered, though if BT had any sense they'd knock together some kind of reality TV Masterchef-style show to select a suitable spatula-juggler.There's no word yet on whether the viewing galleries, for those who don't fancy paying a day's wages for a morsel of Blumenthal's bacon-wrapped peaches, will re-open. What we'd really like to see is the resurrection of the annual race up the stairs to the top of the Tower; now that it has become an unofficial 2012 cheerleader, wouldn't it just be the perfect pre-Olympic event?Some fun (and mostly true) facts about the BT Tower: Opened in 1965 by Prime Minister Harold Wilson, the Post Office tower, as it was known, was an official state secret that was not displayed on maps. It wasn't officially acknowledged until the early 1990s, and taking a photograph of it was against the Official Secrets Act The tower is in fact a working rocket complete with booster module; the rotunda at the top was built to accommodate the Government, Royal family, and selected members of high society should a planetary catastrophe render the Earth uninhabitable