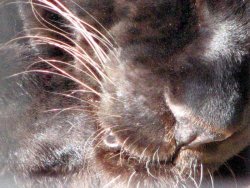 There's no denying that the recent 'Palace puma' story had become a bit of a farce. Episode 123 attempted to iron out a few creases, but for every piece of inaccurate fiction corrected, another story unfolds. And so the Streatham Guardian of Saturday 19th September put their fingers into the pie. They featured the bizarre story of Leia Mazur, who claimed to not only have photographed the local beast, but had become pretty friendly with it! You just couldn't make these stories up!

Mazur allegedly encountered the creature whilst walking along Estreham Road near Streatham Common. She commented, "It wasn't a regular cat", and, "If it was a normal cat it would have run away from us."

The Guardian then continued, "Now with Ms. Mazur having moved house from Streatham to Church Road (near where Mrs Barrett observed a black leopard in August, and began the whole saga), it has prompted purrs of speculation that the cat could be following her and trying to set up a den inside a human's home."

The problem is, the photo, which can be seen at my Beasts of London blog shows nothing more than a domestic cat, with a white chin, sitting behind a fence. The paper commented, "Although she concedes that some people might think her photo looks just like a 'normal domestic moggie', she is determined she saw something bigger and wilder."

Tragically, this story fuelled the fire of the sceptics, until of course the sinister event that took place at the end of September. Sara Hill was walking in Sydenham Park with her son and two dogs when she stumbled upon a gruesome sight. A domestic cat, still wearing its collar, was situated on the footpath. However, most of the cat had been stripped clean of flesh, and all that remained intact was the head and feet.

The unfortunate victim showed all the hallmarks of a 'big cat' kill. The fur had been rasped, and the bones licked clean. The victim showed signs which brought back memories of the 'phantom cat-ripper', an unseen assailant that ate cats around the Bexley area in 1998-2002. This was not the result of psychotic human intervention or dog attack, but proof once again that despite the occasional fictional story in the press, the legend of the 'beast' of Sydenham continues, and will do so for many years to come.