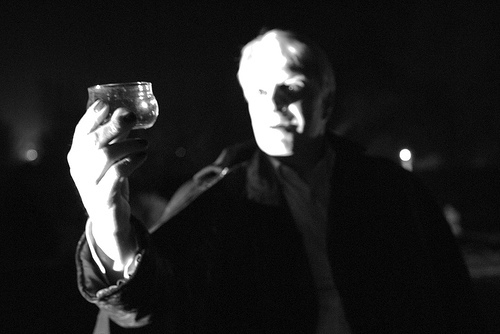 Richard Clarke was a farm worker in Northamptonshire. For several years, since living at the property he was pestered by a spook. Its demands, appearances and gestures tired the labourer, who, at the request of his wife, decided finally to converse with the wraith he had feared for so long.

The spectre was not malevolent, but had been seeking the attention of Mr Clarke as soon as he settled at his property. The spirit needed a favour. It told Mr Clarke that it was a phantom of a man once murdered near the house (in which it once resided) two hundred years previous, in the 1600s. The family of the spirit never knew what happened to their father/husband, because he had been buried in an orchard.

The spectre asked Mr Clarke to travel to London, for there was a house which harboured papers and money. It struck a deal with Mr Clarke, saying, "If you go to London and find the money, I will cease haunting you."

Mr Clarke agreed, and was even met at London Bridge by the apparition! Once there, the spook lead the way to the house and located the cellar where the money was concealed. Mr Clarke gained entry to the property and found the treasure, and was rewarded by the spectre for his actions and the trouble it had caused him.

From then on Mr Clarke was no longer bothered by the phantom, but the tale of the deal was recorded in the Antiquarian Repertory.