Queen Goes To Theatre; Look, She's Just Like Us 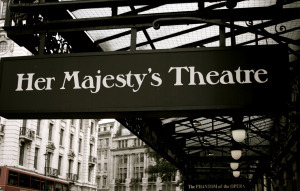 Yes, it seems Her Majesty has been taking one of her low-key trips to the theatre again, something Buck House claims she does 'regularly' and goes unnoticed. (How? We know Londoners have perfected the thousand-mile, glassy-eyed stare of ignoring everyone, but does nobody ever look across, think 'hmm, she looks a bit familiar' and pull out a fiver? After all, this is a woman who's had the same hairstyle for 50 years). This Monday she popped down to Drury Lane to catch War Horse, the National's popular production of Michael Morpurgo's book about a young WWI recruit and his friendship with a horse (there are life size horse puppets as well; we bet that kept Prince Phillip amused).

Apparently the Queen went unrecognised until the interval when the lights went up, and the audience gave her a round of applause which she 'acknowledged with a wave'. (No word on whether it was the famous circular hand movement often seen from the backs of cars.) But were you there? Because we want to know a few things. Is the Queen a cougher? Does she take a bag of Werther's Originals into the auditorium? And where was she going at that interval break - to complain about the prices of drinks in the theatre bar? So many possibilities.