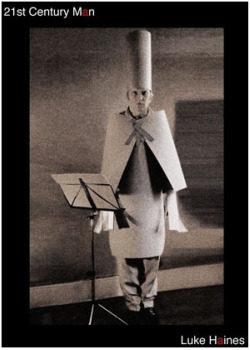 As anyone who has read his autobiography 'Bad Vibes' will know, Luke Haines is definitely one to harbour a grudge. In his revisionist account of the Britpop era, the former Auteurs front-man lays into everyone from Chris Evans to Justine Frischmann with equal ferocity.

So let's hope he's in a more forgiving mood when he appears at the Luminaire next month to play tracks from his new double album '21st Century Man/Achtung Mutha', due out 26th October. With such a talent for offending people Haines is lucky to still have such a devoted following, but his twisted take on pop music deserves a wider audience. Starting with his 1993 Mercury-nominated debut LP 'New Wave' (Haines is happy to take full solo credit for all the Auteurs albums), his trademark snarl and morbid, acerbic lyrics have become a reliable fixture on the fringes of the UK indie scene, and a new album from his poison pen is always cause for celebration in some obscure quarters. And as is clear from his autobiography, Haines doesn't relish touring, so this short UK tour to promote the album is something to be relished while it lasts.

For if the mainstream commercial success that found his contemporaries in Suede continues to elude him, he only has his self-destructive streak to blame. This is a man, after all, who packs his albums about songs about the the likes of the Yorkshire Ripper, Gary Glitter, and assorted terrorists, Satanists, murderers and freaks. From a look at its track listing, the new album ('Klaus Kinski', 'Russian Futurists Black Out The Sun') looks about par for the course. But we still love his deeply unlovable persona, and hopefully at this show he'll mix in a few Haines 'classics' like 'Unsolved Child Murder'. His cryptic on-stage pronouncements should be worth the ticket price alone.

Luke Haines plays The Luminaire in Kilburn on November 25. Tickets are on sale now for £10.