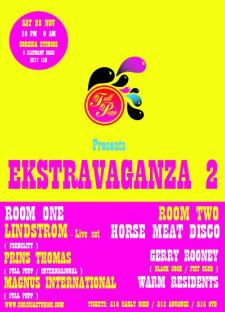 If like us you've been enjoying the recent resurgence of all things disco, you'll be foaming with excitement at the line-up for the second instalment of Norwegian nu-disco pioneer Prins Thomas's bi-monthly club residency Ekstravaganza. Like a kindly, bearded ice-cream vendor, on 28th November Thomas is serving up two scoops of disco action in very different flavours that go together wonderfully.

In the main room (which we'll call 'Raisin') Thomas is joined at a London gig for the first time in several years by his sometime collaborator Hans-Peter Lindstrøm, whose downtempo anthem 'I Feel Space' and last year's extraordinary 25-minute 'Where You Go I Go Too' have confirmed him as the crown prince of cosmic. As anyone who saw his set at Bestival last month will know, Lindstrøm's live sonic adventures exert a near-mystical power over crowds of all persuasions, so expect great things. Oslo resident and space disco cadet Magnus International rounds off the bill admirably.

In the other room ('Rum' for our purposes), London's own Horse Meat Disco will be leading the charge to remind us that disco music is as much about soul and glamour as about tin foil and light-headedness. With help from Gerry Rooney (Black C**k) and Warm residents we are assured some down-to-earth but still very decadent dancefloor activity in case the Norwegians get too icy.

And the Cadbury's Flake in this disco dessert is the venue - Corsica Studios being surely one of the least harrowing things about Elephant and Castle. With its austere décor and slightly ramshackle facilities there really is no better way to pretend you've stumbled into a debauched party in a New York art 'space'. Early bird tickets are only a tenner so get ready to blast off.