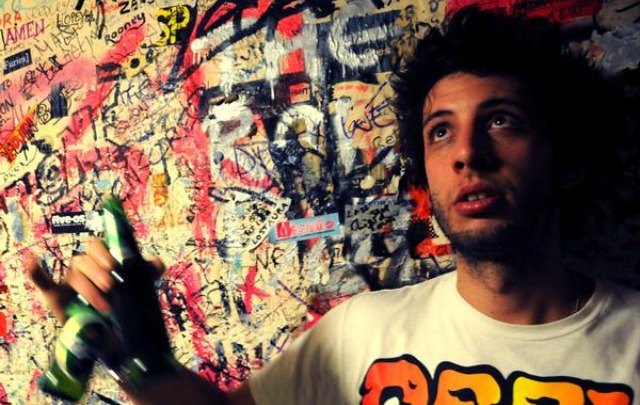 Fulham rapper Example has been knocking about for a few years, first releasing records on Mike Skinner's The Beats label, before returning this Autumn with a new label and a new sound. The Ibiza sounds of first single 'Watch The Sun Come Up' have propelled him straight into the Top 20 and have Radio 1 playing him at every possible moment. With an album to follow that sounds just as full of big pop songs and collaborations with Calvin Harris, we're sure this London boy has a bright future ahead of him. Tonight he plays Club NME at Koko so we caught up for a quick chinwag before

Hello Example. Congrats on your first top 20! Can you tell us a little bit about who you are?

Sounds like a winning combo. Whereabouts in London are you based? What's brilliant and what's totally horrible about it?

I live in Fulham. Born and bred. Its brilliant cos Im right next to the river so it doesnt actually feel like I'm in a dirty noisy city. Whats totally horrible? Not much, maybe the queues at Tescos Express

If we had five hours in Fulham, what's the one thing we should make sure we do without leaving?

What London location has been the most significant in your life so far?

Probably the river Thames. I run along by the side of the Thames almost every day to clear my mind and think creatively.

A lot of the current famous UK rap scene seems to be coming out of East London - is there secretly a West London massive?

Well I wouldn't say that. Grime comes out of East but rappers are from all over London. I'm the only person I know from Fulham who raps although Taio Cruz grew up down the road apparently.

I quite like Koko, but I'd say Hoxton Bar & Kitchen - we've done about 5 sold out shows there over the last 4 years and their food is amazing.

Can you think of an unusual London location that would be amazing to do a gig at?

It would be the London Dungeon. I've always wanted to perform there.

Not done it myself, but I give money to buskers regularly. If they're really good they get £5!

And what's your favourite clubnight in town?

I love Club NME @ Koko where I'm playing tonight. RAM at Matter is pretty decent too and FWD for dubstep heads.

There's a band coming out soon called Siren Sirens. They're gonna blow everybody away I promise you. The Rogues are a very decent live band, two of them sing on my next single and Devil's Gun are worth keeping an eye on - they have some great beats knocking about.

If you want the best pizza in London go to Brixton and search out Franco Manca. It's the most amazing Italian style sour dough pizza and the best thing I've ever ever eaten.