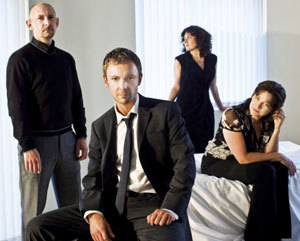 Some will already be familiar with the general plot of Andrew Bovell's Speaking in Tongues thanks to Ray Lawrence's 2001 film, Lantana. Where the film had the luxury of showing all the action in a linear way, the play is, of course, more restricted but also, in many ways, more inventive in its telling of the story.

The opening scenes prove a clever piece of writing and staging where the encounters of two couples run in parallel, the dialogue crisscrossing and overlapping between the pairs. This trick, although it nicely prefigures the rest of the play where the lives of all 9 characters (played by a cast of 4) are interweaving in unsuspected ways, is thankfully short-lived as it gets quickly tiring to follow who is saying what to whom.

The two halves of the play deal mostly with two different sets of characters and, while the

exposition scenes can drag on a bit and slow the story down (the playwright having somehow relinquished the opportunity of showing certain events, rather than telling of them), the play is engrossing, stylish and well choreographed, supported as it is (at least at the beginning) by a powerful set, the character of which strangely seems to fade as the play goes on.

At first rather funny, the plot steadily grows more serious; telling of the chaotic and accidental nature of life and painting a rather dismal portrait of human relationships and highlighting how people can easily hurt each other by, even unintentionally, breaking each other's trust.

John Simm (Life on Mars) and Lucy Cohu (Torchwood) are only one half of a deft quartet of actors (made complete by Ian Hart and Kerry Fox), that conjures up an evening of powerful and thoughtful theatre.

Speaking in Tongues runs until 12 December at the Duke of York's Theatre, St Martin's Lane. Ticket: £10, £15, £29. The play has its own Facebook page for the die-hard fans.