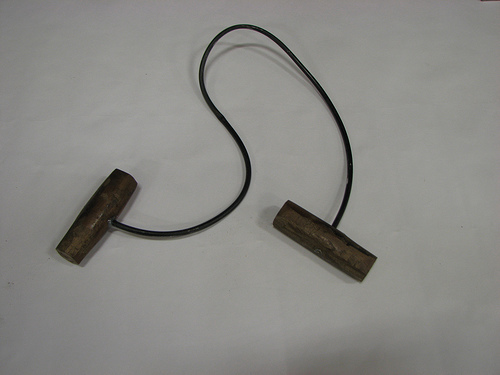 The sinister side of London's folklore is peppered with tales of elusive killers, perverse slashers and stabbers, and all manner of peculiar assailants. These kinds of individuals, or groups, and their fiendish acts, often result in local panic and terror. Such creation of urban hysteria becomes legend. Take for instance the rumour that between 1856 and 1862, phantom garrotters were prowling the city streets.

These sadists were said to apprehend the victim, always from behind, bringing a forearm across the throat area of the prey. As the victim struggled, choking in horror, a vile companion would rob the accosted of all they owned. Victims never raised an alarm or pursued their attackers because this attack would often leave them semi-conscious.

In his fascinating book The London Monster, author Jan Bondeson writes: "...July 17, 1862, Mr Hugh Pilkington, M.P., was garrotted and relieved of his watch by two ruffians as he was walking from the House of Commons to the Reform Club."

Of course, the fact that a leading citizen had been attacked by these mere rumoured assailants, put the streets on high alert. Panic was in the air. Such sadists were perceived by the London press as some kind of inhuman race, said to lurk in the dingy shadows of dank alleyways, eager to feast upon their evil crimes, looting bodies as they lay almost choked to death.

Town folk brave enough to venture out after dark took to arming themselves with pistols and also home made weapons. Many believed that the garrotters were convicts who at the time were being released from prisons early for good behaviour. If by some chance a garrotter was apprehended, there were immediate calls for the guilty to be hung or transported.

The spectral garrotters never truly existed but like so many other social panics, they emerged by way of society and its fears. Scaremongering emerged as local people feared the streets would become inhabited by criminals, released by overcrowded prisons. And as news spread about the liberal prison reforms, it was clear that any crime that hit the streets could be blamed on the alleged inadequacies of the prisons, as town folk boarded themselves in their homes for fear that London would be taken over by a multitude of stabbers, hackers, garrotters and repulsive rotters.