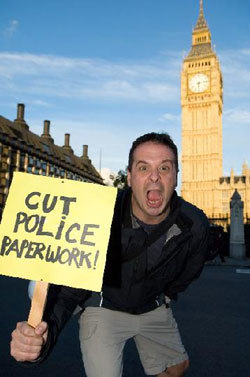 Mark Thomas, part-comedian part-political campaigner, has spent the last few months touring the UK with his new show which weaves his own tales of protest derring-do with audience suggestions for a new manifesto. At the end of each show one or two are decided upon and Mark has been putting them to politicians around the country.

On Saturday it's London's turn, as he puts the people's manifesto to GLA members Jenny Jones, Joanne McCartney and Caroline Pidgeon at the Tricycle Theatre. It's free, but you'll be asked to donate £2 to the Turquoise Mountain foundation. We also strongly recommend booking in advance. Like, now.

You can see all the previous policies online, but some of our favourites include:

- to adopt an opt out system for organ donation

- anyone who supports ID cards should be banned from having curtains

- repeated support for a maximum wage

You can see Mark's normal show at the Tricycle every evening until Saturday, for fast-flowing laughs to leave you pumped up and racing with thought, whatever your political persuasion.

Mark Thomas: The Manifesto is on at the Tricycle Theatre, 269 Kilburn High Road, until Saturday 3 October, 7.45pm, £10 / £15 / £18. The discussion with GLA members takes place on Saturday at 3.30pm. See the Tricycle website for more details.