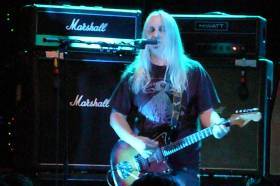 On Friday, the slacker rock icons Dinosaur Jr. returned to London to play Camden’s Koko in support of their recent “Farm” album. When the original line-up of Dinosaur Jr. (J Mascis, Murph and Lou Barlow) reunited four years ago, much to everyone’s surprise after such an acrimonious split, few expected it to last so long. Certainly, no one ever imagined that it would yield an album as fine as “Farm”, with many comparing it to their classic 1987 album, “You’re Living All Over Me”. No mean feat for a band that first formed 25 years ago.

Although the band may not have reached the level of commercial success as many of their peers, no one can deny their influence over the years. For a band that is held in such lofty esteem, the performance is unfussy with banter kept to a minimum. Mascis has aged wonderfully with his magnificent head of sliver hair looks more like the “Gandalf of Grunge” than the “Godfather” (as he is so often referred to) , especially with the backdrop of the “Farm” cover, featuring a couple of tree people looking suspiciously like the Ents from Lord of the Rings.

The distortion drenched set drew heavily on their recent material such as the single “Over It” and the epic “Plans”, but there was still space to pack in older classics “Feel The Pain”, “The Wagon” and of course, the indie-disco favourite “Freak Scene”.

In a world where it seems every band from the last 30 years is reforming, Dinosaur Jr. put most to shame. As well as putting on a blistering live show, they continue to enhance their legendry status by refusing to merely relieve past glories and continuing to produce some of the best material of their career.