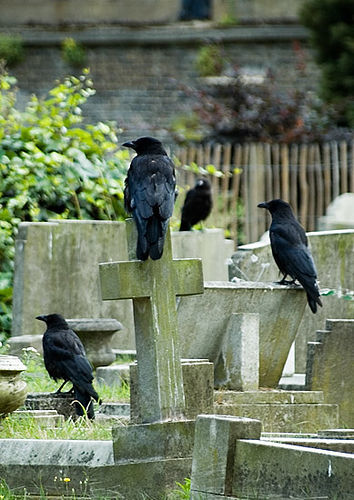 One of London’s “Magnificent 7” Victorian cemeteries, 40 acres worth of green space sandwiched between Brompton Road, Fulham Road and Stamford Bridge football ground, it opened in 1840.

On the edge of zone 1, West Brompton Underground is right next door, Earls Court a short walk away.

Why has it tickled our fancy?

It has plenty of famous residents both real and imagined. - Emmeline Pankhurst’s grave, with its striking art nouveau headstone is on the tree-lined main avenue. Far more hidden is the final resting place of Sir Henry Cole, founder of the V&A; only recently rediscovered, it’s almost unmarked, all but hidden in a quiet corner. Beatrix Potter, who lived just down the road for a while, found plenty of inspiration here - look out for the Nutkins family grave within the ring of catacombs, near the small domed chapel.

The jewel in Brompton’s crown is the grave of a shipping magnate called Leyland, designed by Pre-Raphaelite Edward Burne-Jones. All white marble embellished with bronze lilies, it really is breathtaking. There’s a strong military connection here too, and 12 Victoria Cross winners rest here including John Warneford, a WWI fighter ace awarded the medal for shooting down a Zeppelin - a scene replayed in relief on his gravestone

One of our favourite epitaphs is for Percy Lambert, the first person to drive 100 miles in an hour, whose headstone bears the marvellously Edwardian inscription: “A modest friend, a fine gentleman and a thorough sportsman”. And finally, in these financially delicate times we like the fact that Brompton cemetery reminds us that not even death is certain - it was the first British company to be nationalised.

Nature notes: Topographically Brompton is probably the least interesting of London’s Victorian cemeteries, being almost completely flat save for a raised walkway running down the Eastern side. There are however over 60 species of trees within the 40 acre site, many of which date from the foundation of the site - find out more on the annual tree tour in July organised by the Friends of Brompton Cemetery. An energetic ivy-clearing campaign has opened up large areas of the park to wild flowers, bluebells and snowdrops grow in the shadows, while magpies and squirrels rule when the dogwalkers have headed home

To find out more visit the Friends of Brompton Cemetery. There is a conducted tour of the cemetery, open to all, on the last Sunday of each month (and sometimes more often), starting from the Fulham Road entrance gates at 2:00 pm.

Unlike its 6 sisters, access to Highgate West Cemetery is restricted to guided tour only, unless you're a grave owner or a conservation volunteer. Tours run on weekdays at 2pm and cost £5 and throughout the day at weekends (book in advance to secure a spot 020 8340 1834) . You can visit the East Cemetery, unguided, for £3. Find out more from the Friends of Highgate Cemetery

Image by R.I.Pienaar via the Londonist pool.