Review: Much Ado About Nothing @ Lauderdale House

By Lindsey Last edited 132 months ago
Lindsey Review: Much Ado About Nothing @ Lauderdale House 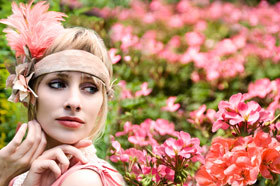 Natasha James as Hero by Visualsoup
The second summer outdoor outing of Much Ado by young theatre company, Veni Vidi, shows that Highgate's Lauderdale House is perfect for intimate outdoor theatre. If only the damn weather could be relied upon.

Here is an idyllic garden setting at the rear of the 16th century mansion, reputedly once inhabited by Nell Gwynne. The tea lawn is laid out with groundlings up front and rows of seats behind and a simple set of pretty bowered seats. The production relies on the wit, charm and projection of its protagonists and, despite various attempts by the wind to carry voices away and drown out dialogue with the rustling of bin bag ponchos, the hum of the overhead flightpath and the drone of traffic on Highgate Hill, it won through with style.

Our Beatrice (Naomi Martin) is dazzling in her green silk suffragette pants, not a word or arch tone lost to the breeze and Benedick (Mackenzie Scott) is every inch her equal, pompous and hilarious. Gorgeous Hero (Natasha James) is flapper-style flirtatious yet modest and her Claudio (Dylan Turner) is a hot-headed foolish hunk, who barely deserves his forgiveness as usual. The slapstick set pieces triggering true love between the sworn singletons work brilliantly as does the inept handling of the pandering philanderer Borachio by the malapropism inclined Dogberry.

If you're at all hard of hearing you'll be better off on the grass if the weather doesn't improve - a still evening would have made this an utterly spellbinding experience. The Great British Summer is threatening to ruin this spirited and vivacious production but pay it no heed! Wrap up well, pack a bin bag poncho and a warming hip flask. Veni Vidi have a treat for you.

Much Ado About Nothing is on the tea lawn at Lauderdale House, Highgate at 7.30pm Weds-Thurs and 8pm on Friday, 28th August 2009. Tickets £10/8/6 (pick sitting on the grass or a seat). Nearest tube, Archway. Wrap up warm! Check the website for updates in the event of rain.