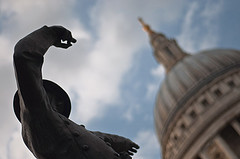 Image by kenchie
It has emerged that Prince Charles' intervention over the Chelsea Barracks plan wasn't the only recent example of the Royal boot trying to crush an unfavoured project underfoot. In 2005, the Prince made a concerted but unsuccessful attempt to stub out a major office and retail development near St Paul's Cathedral.

One New Change, an 87,000sq m project designed by Jean Nouvel due to open next year, was the subject of a letter written to developer Land Securities, in which the Prince complained about the appointment of the French-born Pritzker-prize winner for such a "sensitive site". He offered instead his own advisors, who would allow St Paul's to "shine bright", as if Nouvel had proposed spray-painting the cathedral black and shielding it behind a dark scrim. The letter was, however, ignored, and the development went ahead as planned.

According to one insider, the Prince hadn't even troubled himself to glance at the plans: the mere mention of Nouvel, a modernist architect, was enough for the royal quill to issue forth the polite form of a cease-and-desist order. Fortunately for Land Securities, the letter did not benefit from the oxygen of publicity that earlier this year led the plan by Richard Rogers' firm at Chelsea Barracks to be abandoned. The fate of that project offers a glimpse of what may have been at New Change: a group of classically-minded architects, allied to the Prince, have emerged as the frontrunners, and will set forth their royal benefactor's outdated view that new buildings should look the contemporary of their neighbours. Those unfamiliar with the ideal urban setting envisaged by our future King need only visit the Stepford scenery of Poundbury, which is already crumbling and crime-ridden.

The danger to the profession posed by these demotic and wholly undemocratic clandestine maneuverings is clear, particularly in a time of recession: why should firms spend time and money on a bid that, even if successful, risks being capsized at the whim of an unelected dilettante incapable of seeing that his quirk of birth no longer bequeaths the rule of the land? At the risk of hyperbole, one might paraphrase George Orwell: if you want a picture of the future of London, imagine a Royal boot stamping on an architect's face — for ever.