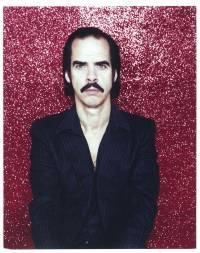 Twenty years after his acclaimed debut novel, “And the Ass Saw the Angel”, Londonist’s favourite Australian goth, Nick Cave, takes a break from music and steps back into the literary world as his new novel, “The Death of Bunny Munro", is published on 3rd on September.

It tells the story of Bunny, a travelling cosmetics salesman, who embarks on a road trip with his nine-year-old-son following the suicide of his long suffering wife, whilst confronting his past and struggling to keep a grasp on reality. It’s a darkly comic tale and certainly not one for the faint-hearted.

The book is available in a variety of formats, including an audio version read by the great man himself (complete with an original soundtrack by Nick and Bad Seed Warren Ellis), and a hugely extravagant boxed and signed edition costing up to £120.

Thankfully, there are cheaper ways for fans to get their hands on a signed copy, as Nick will be appearing at a number of signings around the country, including a couple in London where he’ll be happy to scribble on a no-frills hardback copy. He will be signing copies of the book on the 8th September at Waterstones 203-205 Piccadilly at 6pm, and also the 28th September at HMV, 150 Oxford St at 1pm.