Guerrilla Gardening: The Movement Moves On

By Londonist Last edited 156 months ago
Londonist Guerrilla Gardening: The Movement Moves On 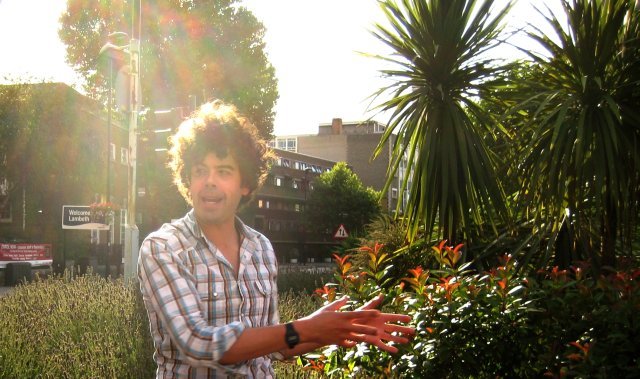 Standing outside the flourishing guerrilla garden at the base of his council estate block in Elephant and Castle, Richard Reynolds points to some shrubs that were once regularly flattened by a local homeless man who used them as a bed. Fortunately, he adds, "He's moved on, to be replaced by more natural wildlife."

Guerrilla gardening, too, has moved on. Having once been an underground movement, it is now, not mainstream, but engaged in a (sometimes heated) conversation with that mainstream. Its adherents carry out a series of delicate negotiations with councils and transport authorities, trying to win recognition for their work without losing the rebellious spirit that animates them. They are, like their plants, growing up.

While giving his talk, in a tour arranged by the Museum of London, Reynolds acknowledges the changing nature of the movement he sparked five years ago when he started his Work in the Elephant and Castle. That first garden, he says, isn't really a guerrilla garden any more. After some angry sessions with the local council, they now acknowledge his work and won't interfere with it.

He admits he makes use of authority when it serves a purpose: the certificate he got for entering the garden in the council's 'Southwark in Bloom' competition made it harder for officials, having (probably inadvertently) recognised his work, to then attack him. Authorities can change their tune, too. A session on the Elephant and Castle roundabout was once halted by the threat of police arrest, but a few months later the cops were waving and tooting their horns as they drove past. "They did ring me up a few months ago on suspicion of seeding some hanging baskets," he adds, standing by one of the beds, "but I was able to reassure them on that point."

Reynolds, who for this tour of south London sites is Wearing a plaid shirt, jeans and scuffed brogues with trailing shoe laces, has a sense of humour about the whole affair, and readily admits that the lettuce planted on the roundabout "doesn't taste very good". The lavender from another guerrilla garden nearby is more successful; it gets harvested today (Monday 31st), dried and turned into lavender pillows.

The lavender field is on a traffic island on the border between two local councils, neither of whom ever showed much interest (or bothered to repair the planter when a VW Beetle crashed into it; Reynolds did so instead). Guerrilla gardening often exposes such fault lines in local politics. In some cases, he says, nobody knows who owns the land. Little wonder it is neglected.

But, he adds, it's precisely that neglect that gives his troops their reason for existence: "That's great for the keen guerrilla gardener, because territory like this, in central London, is our canvas." When, years later, he asked council officers if they would have given him permission to do his first garden, they told him, "Absolutely not."

Anonymity is the first instinct of the guerrilla gardener. It's later on that matters get complicated. Official recognition can mean protection; it can also mean interference and a loss of identity. Knowing which path to take and when is one of the challenges now facing the gardeners.

Not that Reynolds would try to dictate that, despite being the movement's chief inspiration and standard bearer. "I wouldn't want to be in control," he says. To maintain the guerrilla independence, he regularly turns down offers of money and partnership from outside groups. He has also chosen not to turn the movement into a business or a formally recognised charity. And so it retains its anarchic feel, its sense that people are helping out in their own way, because, as he puts it, "Authorities shouldn't feel they have to do everything."