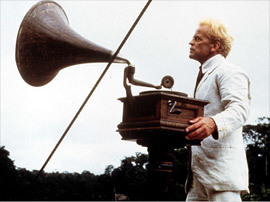 Klaus Kinski in Fitzcarraldo
The latest in the Barbican's ongoing series of auteur retrospectives profiles the work of Werner Herzog, the German fabulist whose films meld fact and fiction, the remembered and the dreamed, and the real and the impossible, to the extent that such fatuous descriptions are rendered meaningless.

As if single-handedly trying to destroy decades of Teutonic stereotypes, Herzog has produced a body of raw, vituperative, unpredictable, quixotic, wholly emotional films, and carved a reputation as a man clinging onto the edge of possibility, unruffled by the snarling impropriety of life: it would be impossible to think of any other director who'd react so calmly to being shot in the arm during an interview in Los Angeles. With such rich pickings to choose from, then, it's a little disappointing that the Barbican has programmed his most well-known films. Not that there's anything wrong with watching them again: those unfamiliar with the almighty fights the director had with his leading man and "greatest fiend" Klaus Kinski, captured in the five films they made together, will be awed by Fitzcarraldo, whose Sisyphean man-against-nature theme mirrored the director's struggle with his capricious star, and the tantrums that found their way onto screen in Aguirre, Wrath Of God still shock.

That the Barbican doesn't screen much of his lesser-known documentary work alongside the big stuff is regrettable, though in their defence the series is timed to accompany the Radical Nature show, hence the attention on films that, as they put it, explore "the hostility and inscrutability of the natural wilderness [and] the interlopers who exist within it". To that end both Grizzly Man and his latest, Encounters At The End Of The World, get a screening. Those fiending for more Werner are in luck: this Sunday the Renoir Cinema is showing a selection of Herzog documentaries to accompany a new DVD box set.

Finally, those inspired by the master are invited to enter a filmmaking competition, with entries to be judged by Herzog himself, and the winner to be screened prior to the documentary Encounters At The End Of The World on September 27th.