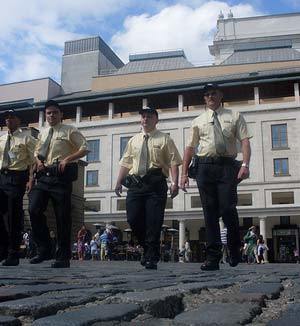 photo by zefrog
Councillor Robert Davis (Deputy Lieutenant of Greater London), Ian Hawksworth (MD of Capital & Country), Councillors Louise Hymas, Tim Mitchell and Alxander Nicoll, and other local dignitaries were on hand this afternoon in the Covent Garden piazza for the official launch of the "Covent Guardians".

The team of four community wardens, the first of its kind to be funded by a private company (Covent Garden London), will "provide a reassuring presence for shoppers and businesses by working closely with the police to tackle antisocial behaviour and crime as well as responding to visitor queries, maintaining street up-keep and assisting local law enforcement".

In recent years, concerns have grown, particularly among amateur photographers, around the privatisation of the public realm, whereby private organisations are put in charge of managing ostensibly public spaces. Let's hope that this new partnership is not another example of this.

More pictures of the event are available here.