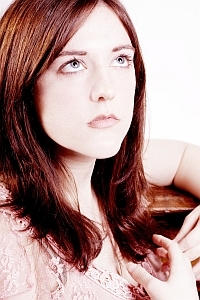 Grainne Maguire
Is it mean to review a comedy gig when there's only seven people in the audience? Ah, sod it. To be fair, it's not Thomas Neumark's fault it's a small gathering - it is 4.15pm on a weekday after all - and he works very hard to successfully keep the energy going. He's got some great lines, a nicely self-deprecating blues song about Waitrose and some quite personal material that'll make you cross your legs. Yet even when he's talking about squicky bodily functions he's charming enough to win you over. A little bit more structure, or a bigger crowd to feed off, and this'll be a great show.

Grainne Maguire has a passion for those nineteenth century novels where love wins out over all the odds. When life started throwing her some shit, she went back to those characters and authors and a routine was born. It's a bit patchy, to be honest; the audience participation section isn't helped by a guy who can't read very well and some very sharp and funny observations are undermined by what seems like a desperate need for the audience to like her. Hearing some of the more uncomfortable parts of her set it becomes more understandable, but she is essentially so effervescently lovely she could get away the dark stuff without having to keep resorting to froth.

Both comedians are on at the Camden Head until Sunday. Camden Fringe runs until 30th August. All tickets £7.50. Check out other Fringe coverage on Londonist.