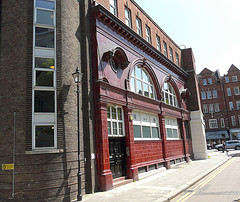 As the Piccadilly line screams from Knightsbridge to South Kensington, bending itself around the dense-packed remains of a plague pit interred in the soil, it passes the tomb of Brompton Road, just one of the many long-closed stations that lie strewn beneath the London streets like the buried playthings of a spoiled child-giant bored with his train set.However, one local lawyer wants to bring Brompton Road back from the great railroad siding in the sky. Adrian Davies is mounting a campaign to convince Kensington & Chelsea council that the station should re-open to the public. He says that the reason it was closed in 1934 — namely, a lack of passenger traffic — is no longer applicable, and that the station could alleviate logjams at Knightsbridge and South Ken.Davies has set himself up a website, though it's a bit threadbare at present, and is encouraging people to join his movement. In his favour is the fact that the station's original building, one of the many fine Piccadilly line designs that Leslie Green bequeathed the capital, is still partially intact; sadly, that scrap of good news is stacked up against the fact that it would be prohibitively expensive to press it back into service. The platforms have long been bricked up, and during the War it was used as an anti-aircraft control centre, then a Territorial Army and Ministry of Defence base. The MoD still own the key to the place, and are unlikely to hand it over easily.Underground History has an excellent report from a 2001 visit to the station, which is probably the closest we'll get to it for now.