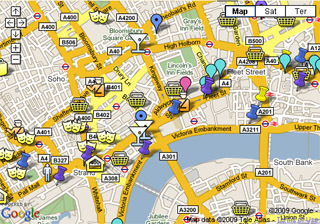 But not by us. Lee Jackson is a man who, short of growing some Bazalgette whiskers, donning a tweed vest and striking out daily for Simpson's on the Strand, could scarcely celebrate the Victorians with more enthusiasm. He's written six novels and two non-fiction books about life in the 19th Century and created the online Victorian Dictionary. Now, the indefatigable Mr Jackson has produced a Google Map showing all the key locations of the Victorian city, an improvement on his previous Google Earth guide. Theatres, shops, lunatic assylums...it's the best cartographical companion to 19th Century London until Google finds a way to do Victorian Street View. Go take a butcher's, and leave comments if you think he's missed anything important.