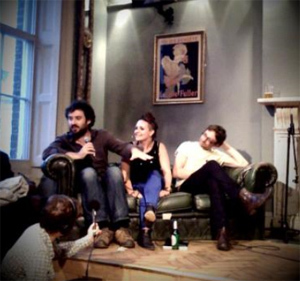 LDM was started by Todd Zuniga, the founding editor of Opium magazine and the charming compere of the evening, in 2006 in New York. It now takes place on a monthly basis in NewYork and San Francisco and has also appeared in Denver, Chicago and Beijing.

The basic premise is this: four writers read their own work, be-it poetry, stories, rap or pages from their novel, and are assessed by three judges in two head-to-head stages before the winners from each stage battle it out in the finale game-show style event.

Last night's performers included: Joe Dunthorne, a member of the writers' collective Aisle16, who rapped slightly self-consciously about raising your status in a world of mediocrity; East-Londoner Tim Wells who read from his own collections of poetry; Nick Harkaway who read passages from his book The Gone-Away World; and Amber Marks who told a delightfully dead-pan story about animal-handlers and their unending confidence in their animals' abilities.

The judges were Tim Clare, also a member of Aisle16 and one of Londonist's highlights of Latitude Festival for his performance poetry, which combines smut and wit in equal measure and whose first book is out now from Ebury Press entitled We Can't All be Astronauts; Dockers MC aka Laura Dockrill and author of Ugly Shy Girl; and Luke Brown of Tindal Street Press.

The night was a definite success with the crowd especially involved due to the judging formula and Londonist looks forward to its return in September.

For more live literary performance you can check out the websites of Aisle 16 whose night Homework is on 29th July at the Bethnal Green Working Men’s club and the last Wednesday of every month, Patrick Neate and Ben Watt’s Book Slam now at The Tabernacle on 23rd July, and Literary Death Match itself.