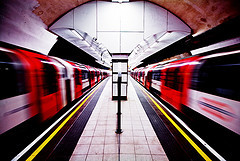 Image by kayodeok
TfL has announced that they are offering refunds to anybody affected in last month's 48-hour tube strike, reversing their earlier decision to point the finger at the RMT. There's a caveat, though: thelondonpaper reckons that applicants for the 'goodwill payment' must prove they suffered a travel nightmare in order to qualify. Photographic evidence of your weeping bride stood up at the altar as you waited for a bus on Battersea bridge might suffice, but if the strike just made you late for beers with Barry down the boozer, your case might be harder to prove.

Transport chiefs might need to get into the habit of offering refunds, as the prospect of another strike has hoved into view. Hundreds of LU engineers and electrical workers have been balloted by the Unite union, who say that London Underground offered a "derisory" final offer before walking away from the table. That offer was a pay rise of 2% over two years, which ordinarily would be a jab in the kidney, if we were not living in exceptional times where firms are begging staff to work for free in order to stay afloat. Many Londoners in countless other industries have had to get used to wage freezes and reduced working hours; most of them don't have their heel pressed on the jugular of the capital's transport network.

The other three unions, RMT, Aslef and TSSA, are said to be considering the offer.